Who knows and who cares? But this question did come up at a recent event I attended.  The venue where this took place claims to be one of the most sustainable venues in London (I won’t get into whether this is true or not, I haven’t quite had the time to do a full assessment & comparison with other venues…Nor do I want to). Interestingly though, all the carpets at this venue are made from goats’ hairs. 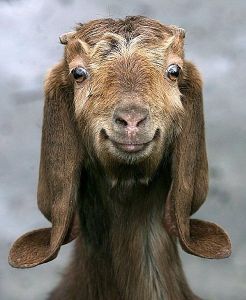 This is a happy looking goat.

I don’t actually want to discuss goat’s hair. Instead, the point I want to make is about the need to constantly question our assumptions, and not just take things at face value. Which I believe is something that is far too common today. And something which I believe is crucial in our quest for a sustainable world.

Sustainability is a complex problem. Nothing about it is straight-forward. There are always unintended consequences. No one really has the right answer. Actually, there is no right or wrong answer, there are simply trade-offs to be made.

So while you think that your Toyota Prius is a sustainable ride, this might not actually be the case. Have you thought about where those precious metals that are used to make hybrid engines are coming from? Or how energy-intensive the manufacturing process of your Prius is compared to that of other cars? Or that maybe buying a used car might actually better than buying a new car because it prevents extracting more resources from the planet? I’m not really advocating that your Prius is or isn’t green, all I’m saying is you should think about it and question those assumptions. (If you are actually worried about your Prius, just Google it, you’ll find plenty of articles covering the subject and you can make your own opinion on which sustainability metrics really matter to you.)

In another chat I recently had with someone I won’t name but who I’m sure will recognise him (or her) self, I was told about algae that produces petrol in ambient conditions, without needing any inputs but sunlight. That’s right – you read correctly: algae that produces petrol, when squeezed, and which can be used in the same combustion engines we have today. How cool is that? Upon hearing this, even I found myself neatly agreeing that we were about solve our fuel problems with this squeezable-petrol-producing-super-algae. But upon further reflection, I started to ask myself what the unintended consequences of this would be: would our beaches become overrun by algae? What about that killer algae I’ve read about recently in the news, would that be an issue? Could you actually scale up fuel-producing algae to produce enough to make a significant contribution to battling climate change? Again, I have no idea. But that’s not really the point.

Questioning ourselves, our assumptions, and the things we are told, is. The counter-argument to constantly questioning everything is that we’ll never actually get anything done – which is a fair point. But to that, I’d say that I’d rather ask questions than jump to conclusions.

7 responses to “Is goat’s hair sustainable?”