Every now and then we meet someone  we know will have a significant and positive impact on the world.  One of these people is the author of our guest blog – Aimee Oxley.  Below she tells of her inspiring journey to help rainforest, primates and people – and shares her despair and hope for the future.

if you have ever wanted to ‘save the Amazon’, wondered at our likeness to chimps or wanted to support young people to change the world, please back this amazing change-maker to make a difference. See her crowdfunding platform: www.indiegogo.com/projects/chimpanzees-on-the-edge. And of course – do spread the word…

I first heard about it in school – geography class with Mrs Parker. No sooner had we been mesmerised by the structure and biodiversity of the Amazonian rainforest, we were told that it was being ripped down at an unprecedented rate. That was it. I had to do something. I started a paper recycling programme in school and put a tray for unwanted paper in every single classroom. It didn’t really take off and I ended up policing all 20 classrooms myself, collecting the trays, dismayed at the lack of response my great idea had received.

It took over 10 years from that class until I finally experienced a tropical forest for the first time. I went to Bolivia, volunteering at a rescue centre for wild animals recovered from the pet or circus trades. It was beautiful forest, miles and miles away from any large towns or cities. Wild jaguars, giant anteaters and tortoises roamed freely around the forest. But all it took was to hitch a ride down to the nearest village to realise that everything was far from okay. The roadside is the best place to appreciate the extent of forest disturbance, since once a road is built, human activities usually centre on the road and spread out.

What became immediately apparent was that our slice of jungle paradise was just one small fragment of forest in a sea of farmers’ fields. Either side of our forest patch, local people were growing maize, sunflowers, papaya, rice, or keeping herds of cattle and trucks full of enormous trees would pass by daily. A month after I arrived, fires ravaged the forest. We were working 18 hours days, night long fire-fighting missions in the dark with nothing but a spade and a litre of water, caring for multiple animals, covering each other when people were getting sick and sleeping when we could find an hour or two.

Left: The results of the forest fire. Right: the effectiveness of the fire breaks we cut in can be clearly seen. Photos: Aimee Oxley

These fires were the result of slash and burn practises used by the farmers to clear their fields.I felt sad. Well, in truth, I felt mad. I was steaming at these human beings who had the audacity to cut down pristine rainforest – the forest and incredible fauna and flora it holds is way more important than a tiny bit of maize, I thought! Additionally, the animals we were caring for had been captured from the forest in the first place, often having been taken from their mothers, who would get shot. The humans were the enemy and the forest and the animals my friends.

Of course I knew that this was a ridiculous stance. I’d studied politics as an undergraduate and was particularly interested in international development and the causes of poverty. The majority of these people were extremely poor and their one field or few heads of cattle were all they had. They needed to survive and even after the harvest of their crop, the financial rewards might not even be enough to send their children to school. In rural areas of Bolivia as much as 80% of the population lives in poverty.

I returned to South America five years later, this time to Paraguay. I was going to study the impact of forest fragmentation and edge effects on small mammals in the Atlantic Forest as a project I designed for my Masters. Now I was much more aware I noticed that the entire roadside during my 6 hours journey from the capital to the field site was no longer natural forest habitat. Soya, cattle and rice dominate Paraguay’s list in terms of the major players in the game of mass forest loss and you cannot but notice as you drive through the landscape. In fact, whilst we were all paying attention to Brazil in the 90s, Paraguay had the highest rate of deforestation in South America and the second highest in the world.

Next was Peru. I worked as a field assistant on a primate project in deepest darkest western Amazon basin. The field site was a 5 hour boat away from the jungle city, Puerto Maldonado, itself a 12 hour drive from anything else. I thought that this would be the most pristine forest I’d ever see, and for sure, once inside it is absolutely out of this world in terms of biodiversity. But as I followed the monkeys down to the river edge I could hear chainsaws. People were clearing the forest even within the conservation concession to make way for gold mining. We stopped the boat on the riverbank one day and had a look around. Everything was gone, the soil dry and, unseen, mercury was impregnating the water.

Borneo. We all know about palm oil but I wasn’t working in palm oil territory. From the plane on my way in I saw the amazing forest I was to work in for the next 16 months collecting data on wild orang-utans and gibbons in the largest chunk of forest left in Borneo. But from the river bank, there was a kilometre or so of sedge before reaching the forest where it had been cut down for timber. Then there were expeditions to the ex-Mega Rice Project. This was an ill-conceived idea whereby a million hectares of forest would be cleared to grow rice in peat, which is of course too acidic to grow rice, meaning that the forest got cleared but the rice never grown. It left what can only be described as an elephant graveyard of the remnants of burnt trees, burning hot from the black ash-ridden soil covering the ground. Indonesia is one of the fastest growing economies in the world, oil palm is spreading like wildfire, over 80% of their timber exports are from illegal logging and fire itself rampages through the country yearly and especially severely in El Nino years. 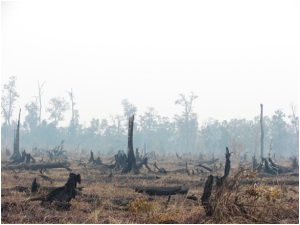 Wasteland and burnt trees at the edge of one of the remnant forest patches cut down as part of the Mega Rice Project. Photo: Rebecca Purse

It’s been a bleak story so far, incredible landscapes torn apart by human disturbances. But what can we do about it? Do I give up and lose hope? Well of course not. We all have a part to play in the big game of life, which is now more globally inter-connected than ever as economies open and produce is exported around the world for the gain of better lifestyles… orfor those privileged enough to be able to afford them. I’ve decided my small part to play in all this is to understand the impacts of these habitat disturbances on forest-dependent species, with primates being my main focus and interest, in order to help develop the best strategies to protect both endangered species and human livelihoods at the same time. This can’t be done without understanding and, importantly, accepting that a certain level of human disturbance is inevitable and necessary.

Collecting data on primates is not enough on its own. Local people need to be involved, their plights and perceptions need to be understood. There have been several studies investigating farmers’ perceptions of crop-raiding primates in the area I will be working, in and around the Budongo Forest Reserve in Uganda, but surprisingly very few studies looking at the issue from the perspective of the primates themselves. I’m hoping to bridge this gap. I’m not expecting a silver bullet from my research, but I am hoping to shed light on exactly how different human activities – different scales of farming, roads, human presence – impact the species that are now trying to adapt to a new landscape, shared with human neighbours. In the unprotected forest fragments outside the reserve, chimpanzees are living in human-dominated landscape mosaics and forest loss is continuing. With a full understanding of both sides of the story – from humans to the forest-dependent species – I think we can create the most informed solutions for human-wildlife co-existence. I’m feeling positive – there’s no other way to feel or else you’d simply crash and burn or live a never-ending battle that cannot be won – but I know it won’t be easy. 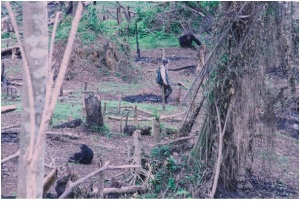 I’m running a crowdfunding campaign to raise funds to support my research, which you can read more about on the webpage and from the video. My research will directly feed into local conservation strategies in and around the Budongo Forest Reserve, as well as IUCN guidelines on human-great ape conflict mitigation. I’m dedicated to working with both the academic community and conservationists on the ground to ensure that my results have a positive impact for endangered primates living in human-dominated landscapes.

I’d like to ask anyone who feels passionately about this issue to please have a look and support funding this important research on my crowdfunding page at: http://www.indiegogo.com/projects/chimpanzees-on-the-edge

Please do share and spread the word too – I’ll keep you posted on how the research comes along, with some good news further down the line I hope….