The elephant in the room is a cow

According to a 2006 report by the United Nations Food and Agriculture Organization (FAO), our diets and, specifically, the meat we consume, are responsible for more greenhouse gas emissions, such as carbon dioxide (CO2), methane & nitrous oxide, than all transportation modes combined. Intensive, industrial scale meat farming and government subsidies has turned meat from what used to be an occasional treat, to an affordable, everyday, every meal product. Demand for meat has increased globally as countries develop and population grows with the total amount of meat produced climbing from 70 million tonnes in 1961 to 160 million tonnes in 1987 to 304 million tonnes in 2012 (FAO 2012a) an increase of 300 per cent in 50 years.

Embedded GHG emissions Estimates of the total emissions from all forms of agriculture vary between 10-35 per cent of all global GHG emissions. A FAO report (2006) found that production of meat contributed between 14 and 22 percent of the 36 billion tons of CO2eq-equivalent greenhouse gases the world produces every year. Large differences in estimates are mainly based on the exclusion or inclusion of emissions due to deforestation and land use changes to provide more land for cattle grazing. In contrast to general trends of GHG emissions, carbon dioxide (CO2) is only a small component of emissions in animal agriculture. The largest share of GHG emissions for meat production are from methane (CH4) and nitrous oxide (N2O), both of these gases being part of the basket of the six most important GHGs that are being discussed at COP21.

Deforestation and land use change Around 80% of global deforestation occurs as a direct result of agricultural practices according to UNEP. This is most definitely the case in the Amazon rainforest. Over the past 40 years, about a fifth of Brazil’s Amazon rainforest has been lost (Reuters 2008) and some of the main reasons for the deforestation is the conversion of forest for cattle ranching and agricultural crops, industrial activities and logging for timber. Deforestation releases carbon into the atmosphere which would otherwise have been trapped in the trees and soil, and it also reduces the amount of carbon dioxide rainforests can absorb.

Embedded water Livestock uses about one third of our total fresh water supply globally. The planet’s total number of cows combined produce around 130 times more waste than the entire human race, and this animal waste is now one of the biggest polluters of fresh water resources. There are approximately 1.5 billion cows, which require a great deal of food therefore, about 98% of the water footprint of animal products relates to water use for feed

Our dietary habits greatly influence the overall water footprint too. In industrialized countries, the average calorie consumption is about 3,400 kcal a day and roughly 30% of that comes from animal products. Under these circumstances, producing a meat based diet of food for 1 day uses approximately 3,600 litres of water, where as a vegetarian diet reduces the food-related water footprint to 2,300 litres per day, a reduction of 36%.

Solutions and conclusions Can we switch to more climate friendly meat? Well there is a hierarchy of carbon intensity of meat, with red meat being the most intensive, and poultry less so, and fish and shellfish less again. However it is a case of six of one and half a dozen of the other, for eg pigs and poultry do produce significantly less methane than cows, however, they are more dependent on grain and soy- which also have their own carbon impact. Grass-fed, free range meat and resulting dairy products may be more environmentally friendly than factory-farmed or grain-fed options, but they require a lot more land, which is an issue in many parts of the world.

A simple, healthy, planet friendlier alternative to swapping meat varieties, is if everyone made small changes in their diets, considered meat as more of an occasional treat and ate more vegetable and pulse based meals. Healthier for us humans, kinder to animals and better for the planet too – what’s not to like?

Thank you to Eco Action Games for sharing their brilliant and playful COPmas campaign with us.

You can follow the campaign with #12COP21 @ecoactiongames & @6_heads. 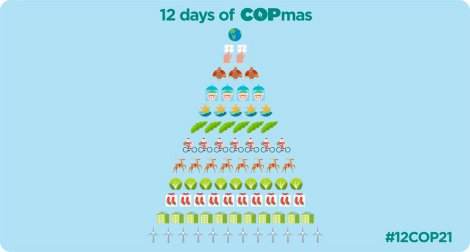