Business travel isn’t always much fun, and my current role requires me to do a lot of it. But I’ve decided to make the most of it – time to see the world, not just airport terminals and offices. The latest was a conference in Nairobi where I was taking part in the Sustainable Stock Exchanges Initiative at the UNCTAD World Investment Forum. I last visited Nairobi 26 years ago & don’t remember much about the city from back then – it was simply the airport we started our trip from. This time I stayed for 3 nights at the Nairobi Hilton, right in the centre of the intense security surrounding the Kenyatta International Conference Centre. Nairobi is an edgy place – read the FCO guidelines and you might just decide not to go. In fact having read them myself I nearly didn’t; what an error that would have turned out to be.

Walking from the Hilton to the conference centre required nerves of steel the first time as every corner was bristling with policemen and soldiers, and to say a white Englishwoman stuck out like a sore thumb is an understatement of some magnitude. But I kept smiling and found the way to the registration area. Once I had the official pass round my neck it seemed to provide some sort of protection/acceptance token, and the tense atmosphere evaporated a little.

So a couple of days later, conference duties complete I booked myself on a 3 night trip to the Masai Mara. This required all my powers of negotiation (& lashings of charm) as it turned out to be high season and that of course means the price goes zooming up and availability zooming down. I should have known it was high season – one of the main reasons I was determined to get there was the fact that the conference coincided with the Great Migration, when millions of wildebeest and hundreds of thousands of zebra move from the Serengeti plains of Tanzania crossing the Mara river in Kenya to graze on the Masai Mara grasslands. One of the greatest sights of the natural world and something it’s said you should see before you die. And working in sustainability for me it offered a reality check of why I do what I do.

With the help of Harun and Purity, two excellent local travel agents who were based at the conference for the week, a price I could cope with was agreed and the same afternoon I set off for Wilson airport to get the Safarilink flight to the Mara. That in itself was a feat to conjure with; Nairobi traffic is pretty terrible anyway, but with the UN in town and all the roads around the conference centre closed off it was a nightmare. What I was told is normally a 10-15 minute taxi ride took well over an hour. I was convinced I was going to miss the flight which after all the effort it had taken to book it would have been devastating. But my driver worked a miracle, and I arrived at the charming if a little ramshackle entrance to Wilson in time for the flight. And the Safarilink terminal is very smart. My bags duly weighed (15kg max including hand luggage) and I was aboard the Cessna caravan feeling nervous – small planes and all that.

Then the short and bumpy descent and we were on the Kichwa Tembo airstrip, the late afternoon dusty warmth with its particular dry scent feeling so good after the interior of the plane.

An open sided land cruiser driven by a very tall, very handsome Maasai warrior in traditional red robes (who turned out to be the camp’s Eco-expert and a highly experienced Safari guide) was waiting and within minutes of stepping down from the plane we were driving towards Kichwa Tembo tented camp. Halfway there and we had already stopped to view some skittish zebras, a splendid buffalo wallowing contentedly in mud, giraffes munching through the trees, and all incredibly close.

This was, after all, my transfer from the airstrip, and not officially a game drive. So when we rounded the top of a rise to see a young male lion reclining lazily in the long grass, and then his companion appearing beside him, I was completely bowled over – one of many pinch-me moments to come. 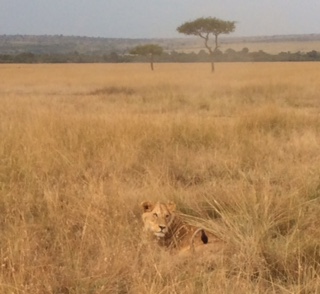 Arriving at the camp, I was shown to my “room” – a rather beautifully appointed tent which really did feel like I’d fallen into my own personal Out of Africa moment, with a view from the wooden terrace into the trees where animals wander past seemingly oblivious to the human activity close by. Tranquil and peaceful in the warmth of the day, but once darkness falls you are under strict instructions never to venture out alone, and have to be escorted to & from your tent by a security guard suitably armed. And the nocturnal noises really are startling, made somehow a good deal more worrying knowing the only way you can get help is by using the personal alarm canister thoughtfully provided along with torch and candles.

After a pretty disturbed night with every call and cackle eerily magnified, including the clear sound of a crying infant – actually a galago (also known as a bushbaby & now I know why), and one particular incident of what sounded like someone tap dancing across the verandah (probably a wart hog) my wake up call and morning tea was brought by the lovely Cedric, and it was a relief to get up and greet the day. And it’s an early start if you want to make the most of it. At 6.30 we were already in our vehicle and setting off as the sun rose over the horizon, the deep orange fireball rising rapidly and casting its beautiful glowing light over the Mara grassland. It’s cold in the early morning, and the bright red Maasai blankets thoughtfully provided are quickly tucked around knees to keep the chill out. But all thoughts of discomfort evaporated instantly, when driving over a rise we see a lioness, serenely gazing over the plain. And behind her hidden in the long grasses four more young lions, two males and two females steadfastly ignoring each other like kids at a school disco.

The breathtaking sights continued – David Attenborough and I are as one. Crocodiles taking wildebeest as they swarmed across the river, a rare sighting of a leopard sunning itself on the river bank, hippos sunbathing with a huge crocodile, multi- generational elephant families, the day could not have been more breathtaking with those pinch-me moments coming thick and fast.

On my final day in the Mara our wonderful guide Chris told us there were cheetahs possibly close to the Tanzanian border so we decided to see if we could find them. It’s a long dusty journey and no guarantee of success. On route we encountered elephants and giraffes, elegant Thompsons gazelles, Topis standing on termite mounds, and the plains were filling up with more and more wildebeest and zebra as far as the eye could see as the great migration continued. Stopping for breakfast after a couple of hours of slow traverses across the area the cheetahs had been sighted the previous day, we decided that after the very welcome coffee and rolls we would try one more drive through and then head back towards the Masai river and the teeming life around it.

And there they were. Two slender male cheetahs sitting a few metres apart from each other. As if in response to an invisible signal they stretched languidly, and then both began to walk very slowly towards the massing wildebeest. Watching them from a distance (binoculars are very useful!) they seemed to be moving in slow motion as they approached the herd. Then an extraordinary turn of speed and a young wildebeest was down, one cheetah taking the throat and the other pulling down the hind leg. It was over in seconds.

It was an immense privilege to witness the natural world in all its grandeur, and to see these beautiful creatures in their habitats. Shocking news broke recently that in the last 7 years some 30% of the entire African elephant population has been destroyed by poachers, driven by the Far East’s insatiable appetite for ivory. We must do all we can to protect them. 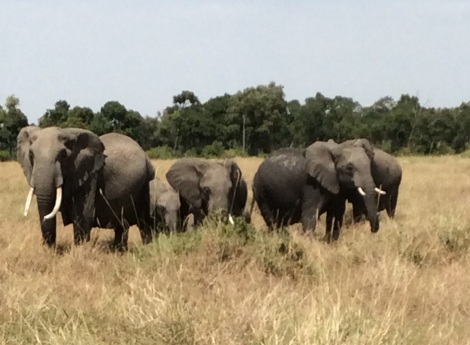 6Heads is a community of curious and committed change makers, we are a platform for new ideas and events and champions for innovations and sustainability. If you would like to share an idea with us please email Louisa on louisa.harris@6-heads.com

Our next get together is on Tuesday 1st November, please get in touch for your invite